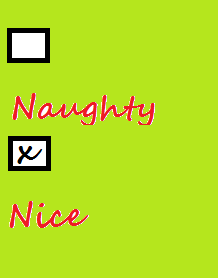 You sit up in your chair. There aren’t many clients whose voices you’d recognize immediately, but this is definitely one of them.

“Mr. Kringle. Yes, it has, sir. I wasn’t sure you’d be needing my services again.”

“Last year, I didn’t. But this year, I checked the list twice, and I’m still not sure what to do with this one. He’s mostly a good boy, but he’s done some naughty things, and I’m not sure if he’s really sorry for them or not. I trust you’re not too busy to take the case?”

He knows darn well you’re not. He sees you when you’re sleeping, after all, and you were napping right before this phone call.

“I can handle it, Mr. Kringle. Same rates as before?”

“That’s more than acceptable, Nancy. I’ll even make sure some of the Mrs.’s peppermint bark winds up under your tree if you pull this one off.”

You grin from ear to ear. “With incentive like that, how can I say no. Email me the particulars as soon as you can, please.”

You take a glance at your calendar. Three days until Christmas Eve, meaning you’ve got exactly three days to get this boy onto the Nice list.

The file labeled “Jack” doesn’t have much information. A photo of John Livingston Jr. with his single father. You’ve got his address and the school he goes to, and information on the father’s workplace as well. The Kringles don’t like to share details about what children do to get on one list or another, but you use some slightly Naughty software to hack into the school computer. There’s not much of a disciplinary record, but you didn’t expect one for a kid on the fence.

It’s not a lot to go on, but you’ve worked with less. It’s now time to figure out a strategy. They’ve got some Christmas shopping to do tomorrow. Perhaps you’d better use that to your advantage.

Chosen: Toy stores are where the true naughty/nice qualities come out. Go stake it out.

The store really can’t afford to have someone whose job is simply to wander around the toy department, pick up toys which have fallen to the ground and put other toys back where they came from. That’s not to say they don’t need someone to do that job, however, and everyone can see that. Thus, nobody who really works here seems surprised to find you in the generic blue vest walking around doing that.

You see John Jr. and his father heading your way and you busy yourself in the building toys section re-shelving some of the sets. He had asked for a set in his letter to Santa. You shake your head at the thought. Normally that’s the first thing in the file from the Kringles, but you had to dig pretty deep into the material they sent you to even find it. Things must be stressful for Ginger, the elf on Naughty list duty who works with you on these cases.

When you hear the boy’s voice for the first time, the word choice is promising. “Can we get this for Geoff?”

Geoff is his best friend, but more to the point, John Jr. is thinking about Giving, not Receiving.

“I think we can swing that, champ.” His father’s smile never has a chance to reach his lips. His cell phone goes off. He must have the volume set pretty high to hear it going off so clearly over the piped in sounds of a children’s choir with more heart than talent.

John Jr. beams. “Is that Carol? That’s her ringtone isn’t it? I like her.”

From up on the ladder where you’re re-stocking gifts, you watch them out of the corner of your eye. The father pushes the “Ignore” button.

“Yeah, it’s Carol. But I can’t really talk to her now. There’s a lot of shopping left to do. Let’s get going.”

John Jr. looks confused and a little horrified. “Aren’t we going to get a toy for the charity barrel? We always get them something.”

His father freezes for a moment. It’s hard to see over his shoulder, but he looks like he’s kicking himself. “You are absolutely right, champ.” He glances around, sees you with your hand on a box, and gestures. “What about that castle set this young lady’s putting up there? Think someone would like that?’

John Jr. nods, and his father looks back up to you. His smile is utterly charming. “May I snag one of those from you, miss?”

The hold music is catchy enough that you’d normally be tapping your toes and searching your desk drawers for candy canes. You’re just a little too agitated for that, however.

“Oh, hey! The big guy told me you were back on the job. Good to hear from you.”

“Good to hear from you too, but I need you to be honest with me.”

Despite her high pitched voice, there’s no doubt Ginger can be all business when the time calls for it. That’s how she’s kept her position in one of the most competitive divisions at North Pole Central. “What’s up?”

“Whoa! What on earth are you talking about?”

“I watched the kid. He was surrounded by toys in the store, and I didn’t hear him ask for a single thing. He even reminded his dad to pick up something for the toy drive. There is no way this kid is Naughty list material.”

“Yeah. I’m here. Sorry.” You hear some clicking on a keyboard. “I had to pull up the file to check . . . something. Anyway, as I understand it, there’s no issue with a lack of kindness. Your subject has just done some Naughty things, and we’re not sure if he’s sorry for them or not.”

You shake your head. “Okay. If you say so. The kid’s spending tomorrow with his grandmother. It won’t be easy, but I can try to find a way to get him to open up . . .”

Ginger interrupts. “Nancy, you know I’m the last person to tell you how to do your job, but take my advice. Go visit the father. He knows everything about the kid, and I’m sure you’ll learn what you need to know from that source. Gotta run for now. I got a boatload of last minute greedies that just came in.”

The line goes silent. You blow out a long breath, reconsidering the problem.

“Focus on the father, huh?” You know you’re stressed out when you’re talking to yourself. You begin to sift through the file, taking more of a focus on John Sr. One word jumps out at you: Carol. They’ve been dating since last Christmas.

When she opens the door, you hold out the empty mugs and the packets of gourmet chocolate mixes.

“This is going to be one of those awkward conversations that’s not going to be any easier to believe no matter what I do. So, I’m bringing cocoa. It still won’t make this any easier to believe, but you’ll have hot cocoa, which makes just about everything better.” You stick out your hand. “Nancy Nyce. I’m a private investigator looking to keep Jack off the naughty list.”

She stares at you dumbfounded. There are only two ways for a person to respond to statements like this. They can call you insane and tell you to go away before they call the cops, or . . .

An hour later, Carol is knocking on a different door. It takes just a bit too long to open.

“Hi,” she replies. “Let’s talk about why you haven’t been returning my calls, please.”

He glances your way. “Who’s this?”

“Christmas consultant,” you quip. “I’m just hear to pour the eggnog and to make sure everything goes all right for Jack Jr.”

They both scrunch their faces up at you. He speaks first. “My son never goes by Jack. He says it makes no sense how you can get Jack out of John.”

You absorb that for a moment. They hired you to get John SENIOR off the naughty list? Oh, you are going to have words with Ginger and Mr. K.

“Sorry. Bad intel on my part. Shall we?”

You push past him, easy enough when he’s so confused.

“Where are you going?”

He stops because you have opened the refrigerator door to find three old-fashioned milk bottles full to the brim with pale yellow liquid.

“Where did those come from?”

“Focus on Carol, Jack. I’ll take care of the eggnog.”

You shoo them out of the room, but you can hear them. You pull out a nutmeg and a grater (standard issue when working for the Kringle family) and you start to grating as they talk.

“So, why did you stop calling me?”

She says not a word more. Eventually the silence becomes too heavy for him not to “Because you started talking about our future, and I realized I didn’t think we really had one. But Johnny got pretty attached to you and . . .”

He stops, unable to say more. She takes up the thread.

“It didn’t seem right to break things off right before Christmas.”

“So instead you stopped answering your phone and just hoped I’d go away? That seemed right to you?”

You roll your eyes. It takes Jack way too long to answer this no-brainer of a question. “No. That was even less fair to you. I just couldn’t . . .” He lets out a sigh, and gives up trying to justify things.  “I’m sorry.”

You can tell he means it. And that is the apology which will get him off the naughty list. You bring in the drinks, pat them each on the shoulder, and walk out the door.

“So please let the big guy know Jack can get off the naughty list. And thank Mrs. K for the peppermint bark.”

“I will, Nancy.” Ginger sounds exhausted. “We had Jack’s present ready to go, so I’ll give the boys on sleigh loading the go ahead to put it in the sack. We’ll deposit your fees in about an hour. Thank you.”

“Always happy to lend a hand.”

“Yeah. I figured. But considering how he handled things in his last relationship, I don’t think it was quite in the cards.”

You narrow your eyes. “Tell Mr. Kringle I’ll be adding a ‘no matchmaking’ clause to all my future contracts with him. It’s bad enough when the Cupid Group tries to pull that stuff with me. I’m fine by myself, and if I decide I want his help in the future, I’ll put it in my letter.”

“Sounds good. I need some shut eye before we go into final prep, here. Have a Merry Christmas, Nancy.”